It was my 3rd and last day in Hanoi and I decided to visit other landmarks in the Old Quarter, French Quarter and Ba Dinh district. My 3rd hostel was at Halley Hostel which is very near the night market and it’s in Old Quarter.

I went out at 10AM from the hostel, and from where I stayed in the Old Quarter, I took a Grab Bike to the  St. John Cathedral for only VND 14000. I just went around the church and found eventually found a cyclo guy who offered me a  120K for the cyclo tour for an hour. (This is affordable as to my first cyclo ride from the Old Quarter to Hoan Kiem Lake on my first day- it was 50k.). So my plan is to only do a 1-hour trip. 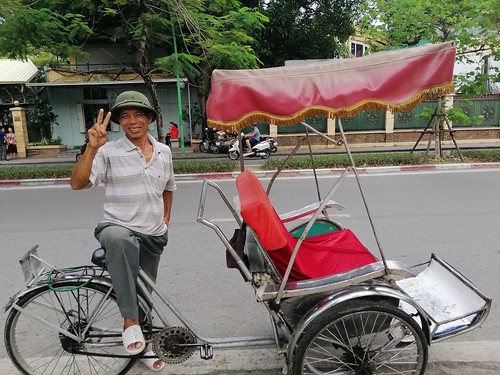 The Cyclo Driver – I showed him the map and told him to bring me to Ba Dinh District. He just agreed. I never thought that he will brought me to  Hanoi Train Street–If you want to stop, just tell your driver. He can even take a snippet for you.

I haven’t witnessed the passing of train since I was there in the morning, so better check out the tourist information or with your hostel/hotel if what time does the train pass on this railway. The location of the railway is between Lê Duẩn and Khâm Thin street, Old Quarter. If you will use a Grab Bike, enter Ngo 224 Le Duan into the drop-off point or on your google maps. On this area you can still see the locals and their everyday living. There are coffee shops and small, cozy restaurants beside the railway.

After this stop, we already entered the Ba Dinh district – the historical area of Hanoi. We haven’t stopped anywhere–yet I have seen a lot of historical sites along the way.

The cyclo dropped me at Quan Thanh Temple as my 1 hour is over. Since I wasn’t able to enter the temple, I just stayed outside and bought some pasalubong for my friends. Bags & pouches were, by far, the most affordable that I have seen.

I finally went back to the Old Quarter for my last buys. I took a Grab bike from the temple to Dong Xuan Market costed almost 120K VND.